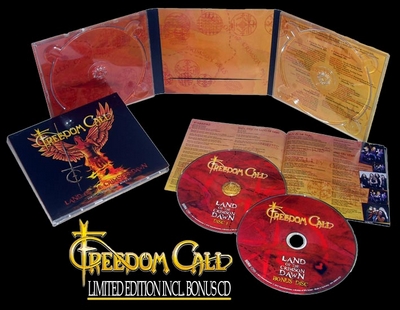 LAM : "Land Of The Crimson Dawn" is your 8th studio album. What is the story this time ?

Freedom Call (Chris Bay) : The main topic of Land of the Crimson Dawn is the virtual world, a dimension in between bit and bytes. People are longing for to escape from reality, maybe they'll find their place in the digital Cyberworld, like World of Warcraft or in guilds of communities.
There are a lot of different digital zones you can move...close to reality...find it out by yourself!
The story about the glorious Land of light, the 66 Warriors or the Age of the Phoenix will animate your individual power of imagination. You can built up an own creation of fantasy...built up your own private paradise...:)

LAM : You have a new drummer Klaus Sperling (ex-Sinner, ex-Primal Fear),, may you introduce him. And why did you asked him to join Freedom Call ? What did he bring to the Freedom Call sound ?

Freedom Call (Chris Bay) : Dans schedule was growing and growing around 2007 and some shows and tour dates were colliding in between Freedom Call and Gamma Ray activities. So Dan decided, heavy-hearted, to work with Gamma Ray.
But Dan and me are best friends and we're still spending good times together...so he didn't leave the band in trouble!!
On the one hand I was disappointed about his decision, on the other hand we can prove, that Freedom Call never was a project of Gamma Rays drummer!!
It was a creeping process, from 2007 til 2010...so the band could prepare well for the change on the drums.
In this slow process was Klaus Sperling (Ex-Primal Fear and more...) working for us first as a stand-in drummer but then we did welcome him as the official drummer of Freedom Call!
I met Klaus the first time in 2005. He was drumming for a supporting band for Freedom Call and from the beginning on we were musically in common.
Klaus is not only a brilliant drummer, he also brings into the band a fantastic mood and lots of fun...:) Great guy!!
He emphasized the compositions with his own individual style of drumming...
Maybe it's his credit, that the new album Land of the Crimson Dawn is sounding more alive and human groovin' than some previous work.

LAM : Did you change your recipe for the writing of this album ?

Freedom Call (Chris Bay) : I do not calculate the music, I don't try to simulate the trademark of Freedom Calls style...music is pure emotion, and only emotions are leading the direction of my songwriting.
But I'm also influenced by the development of music and I don't defend myself against to put modern elements in our music.

LAM : Had you some goals for the album (technical stuffs, sound...) ?

Freedom Call (Chris Bay) : Instead of using samplers or keyboard sounds, we recorded all string- and violin parts by a real violin, played by an orchestra musician.

LAM : With « Land of the Crimson Dawn » you talk about a new world, a new dimension... Was it easier to let you creativity grows, because it's limitless. Or was it tricky, because you can go in every direction and loose yourself ?

Freedom Call (Chris Bay) : Life is my inspiration. I'm walking awake and open minded through my life, I'm interested in so many things.The experiences I make are influencing my creative working. I travel a lot, there I can see lots of very interesting places and meet amazing and friendly people...every moment makes me inspired in writing music.

LAM : Where did you record this new album « Land of the crimson dawn »

Freedom Call (Chris Bay) : We worked on different places. But all the studios were in the area of my hometown Nürnberg/Germany. The main studios we worked were the « FC Studio » & « Separate Sound Studio / Nürnberg »

Freedom Call (Chris Bay) : Crimson Dawn - is the « Opus » of the album. We combined different rhythms in different speeds. The orchestral parts are characterized by natural violins and classical choirs.
The choirs are arranged classically and for the mid part I summarized several vocal tracks in different styles...that makes it sounding growl:)

LAM : A little bit of « old school »sound for Back into the land of light. A word about the creation process and the recording of this track.

Freedom Call (Chris Bay) : Back into the Land of Light  was the first song I wrote for this album.
Obviously I was influenced by older times when the typical Freedom Call trademark Happy Metal was born...:)

LAM : A word about « Hero on Video » (creation process and the recording )?

Freedom Call (Chris Bay) : Hero on Video  definitely one of my favorite songs of the new album! The songs was written in a period of 12 hours...it was part of my creative explosion. This song is developed close to the main topic of the album, the World of Warcraft and computer games.
We already did a video shoot of Hero on Video, which will be released in February at several TV stations and youtube/facebook.

LAM : Do you like video games, FPS or MMORPG. And do you spend a lot of time to play ?

Freedom Call (Chris Bay) : I'm inspired by imagination and illusions to create the main topic of the album Land of the Crimson Dawn, but I'm not really involved into the world of video games! There is no time left for gaming...:)

Freedom Call (Chris Bay) : Beside Hero on Video I like the song Killer Gear very much ...it's in an style of arrangement and sound, which Freedom Call never did before.

LAM : There are 6 cover songs on the digipack version. A word about the bands. Did you let them choose their coversongs. And what do you feel when you listen your songs in the hands and mouth of other musicians ?

Freedom Call (Chris Bay) : In the last two years we met many musicians and bands, whom we made friends with. We spent great times with these friends, so I just asked them to tribute a Freedom Call song on our album.
I'm really impressed about their great work, full of energy and individual inspiration!
In my opinion is that CD a fantastic Bonus material, that makes the Ltd. Edition as a REAL special Edition!!

LAM : A word about the cover artwork by Jens Reinhold, it's the third time you work together.

Freedom Call (Chris Bay) : The motive in the front of the artwork is the Phoenix, which has landed to the Land of the Crimson Dawn...the Phoenix is the symbol of immortality, of new life. Freedom Call is a pure positive thinking band and I could see an alliance to the symbolic of the phoenix.

Freedom Call (Chris Bay) : We're already in cooperation with some promoters in France. Hopefully we can announce tour dates in France soon!

Freedom Call (Chris Bay) : The new albums topic is the digital world of cyber, so it was near to choose a song which fits with the concept.
The band in cooperation with the label decided to take the song Hero on Video.
We love this song, cause it mirrors the happiness of rock music!
Beside the live performance we also had great actors on the set and you can expect a awesome mixture in between Happy Metal atmosphere and comedy:)

LAM : Our special question of the year to end our interview : In your songs you talk about people, you create some imaginary heroes... If you had the skill to give life to one of them. Who would it be ? And in which song do you talk about him or her ?

Freedom Call (Chris Bay) : People are longing for heroes!! There are the 66 Warriors, the Phoenix, the Hero on Video, Rock stars...more than a handful of heroes:))
I'll take the Rock Star and make him alive...:)

Freedom Call (Chris Bay) : Thank you very much for the interesting questions and your support!
It was fun to answer and I wish you all the best...